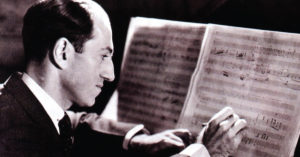 George Gershwin. The program includes Rhapsody in Blue as well as a concert version of Porgy & Bess, featuring an all-star cast of singers and two choirs.

About Richard Glazier
Every artist has an epiphany. For classically-trained, award-winning pianist Richard Glazier, it happened at age nine, when he saw the film “Girl Crazy” with a score by George & Ira Gershwin. He was so excited by the music he heard, he was prompted to write a fan letter to famed lyricist Ira Gershwin. After corresponding with each other for three years, Gershwin invited his young friend, then 12, to meet him in Beverly Hills. During their visit, Ira asked Glazier to play a Gershwin tune on the piano that once belonged to his brother, legendary composer George Gershwin. Fueled by Ira’s encouragement and interest, Glazier dedicated himself to the Gershwin repertoire and the American Popular Songbook, eventually becoming one of the genre’s leading authorities. Over the years he has also developed a keen interest in contemporary music standards from the Broadway stage and the Hollywood screen.

Born in Indianapolis, Indiana, Glazier began studying piano when he was six years old. Glazier earned his Bachelor and Master degrees in Piano Performance from Indiana University School of Music and a Doctorate of Musical Arts from the Cleveland Institute of Music. In 2007, CIM awarded him its prestigious Alumni Achievement Award for his contributions to American Popular Song.

About Jonita Lattimore
Jonita Lattimore made her Lyric Opera of Chicago debut in Kurt Weill’s The Rise and Fall of the City of Mahagonny, and was also seen on Lyric’s stage as Micaela in Bizet’s Carmen. She recently performed the role of Countess Almaviva in Le Nozze di Figaro with Tulsa Opera, and debuted in the title role in the world premiere and recording of James Niblock’s Ruth at Blue Lake Fine Arts Festival. With Houston Grand Opera she appeared as Marguerite in Faust and presented the world premieres of Harvey Milk, The Book of the Tibetan Dead, and Jackie O, which was recorded on Decca. She made her Paris debut at the Bastille Opera as Serena in Porgy and Bess. She is an adjunct professor on the faculties of the Chicago College of Performing Arts of Roosevelt University and Columbia College.

About Dwayne Clark
Dwayne Clark is a celebrated actor, singer, educator, performance coach and motivational speaker. Clark made his NY opera debut as ‘Sportin Life’ with New York City Opera in 2000. Shortly after, he portrayed the character in the Emmy Nominated Live at Lincoln Center broadcast of Porgy and Bess, and was said to be “a limber tenor with athleticism and grace” in The New York Times. Most recently Dwayne portrayed ‘Sportin Life’ with the Mexican National Symphony Orchestra under the direction of Carlos Miguel Prieto, and with the Louisiana Philharmonic Orchestra, New Orleans Opera, and Fresno Grand Opera. He recently appeared in the Tony and Grammy Award winning revival of The Color Purple. He also wrote and starred in A Portrait of Ray: A Tribute to Ray Charles.

About Alvy Powell
Alvy Powell, one of the world’s best known interpreters of the role of Porgy, has won acclaim for his performances at La Scala, New York City Opera Live at Lincoln Center PBS, San Francisco Opera, Cape Town Opera in South Africa, Sydney Opera in Australia and Houston, to name a few. In 1996 Mr. Powell was nominated for a NAACP Image Award for his portrayal of Porgy. He has appeared as Bartolo from Le Nozze di Figaro with the Virginia Opera; and Sharpless from Madama Butterfly with the Connecticut Opera; Colline in La Boheme with the Tulsa Opera and Opera Pacific; and Timur in Turandot with Opera Carolina, Opera Grand Rapids and the Cleveland Opera. Mr. Powell made his film debut as Balthazar in the BBC’s production of Amahl and the Night Visitors.