Carmen Bradford joins the SSO to pay tribute to “The First Lady of Song,” Ms. Ella Fitzgerald. With performances on four 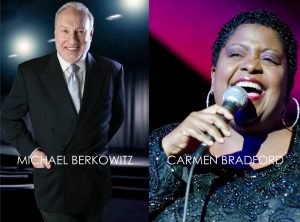 Grammy Award-winning albums, sold out concerts the world over, and 16 recordings, Carmen is considered to be one of the greatest jazz vocalists alive today. The SSO is thrilled to welcome guest conductor Michael Berkowitz, a well-known pops conductor and a top-notch drummer.

Born in Austin, Texas and raised in Altadena, California, Carmen Bradford grew up with music in her home and in her heart. It was only natural that Carmen would follow in the footsteps of her great family legacy being the daughter of legendary trumpeter/ composer Bobby Bradford and world renowned vocalist/composer Melba Joyce. Her grandfather Melvin Moore sang with Lucky Millender’s Big Band in the 1940’s making Carmen the third generation of incredible musicians. She has carved out a place in music history for herself and is playing an integral role in this uniquely American art form called jazz.

Carmen was discovered and hired by Mr. Count Basie and was the featured vocalist in the legendary Count Basie Orchestra for nine years. She has since performed and/or recorded with: Wynton Marsalis, Shelly Berg, John Clayton along with the Clayton Hamilton Orchestra, Nancy Wilson, Doc Severinsen, Tony Bennett, James Brown, Patti Austin, Byron Stripling, Dori Caymmi, George Benson, Lena Horne, Frank Sinatra, Joe Williams, DIVA Jazz Orchestra, the National Symphony, Rochester Philharmonic, the Lincoln Center Jazz Orchestra and countless artists around the world. Carmen performed on two Grammy Award winning albums with the Basie band in the 1980’s and later collaborated on a third Grammy Award winning album, “Big Boss Band,” with guitarist George Benson in 1991. Her soulful voice warmed the hearts of Americans through the celebrated performance of the classic duet, “How Do You Keep The Music Playing?” on the Johnny Carson Show that same year.

Carmen began another chapter in her illustrious career as a solo artist with her critically acclaimed debut album “Finally Yours” (Evidence Records) in 1992. The 1995 release of her second solo album, “With Respect,” (Evidence Records) established the Atlanta-based singer as one of jazz music’s most diverse and exciting vocal stylists proving to the world that Carmen Bradford was a unique voice in jazz in her own right.

Carmen teamed with singer/composer Kenny Rankin for the Benny Carter Songbook Project making history once again. As Carmen looked around the room she exclaimed “What an honor!” upon seeing many faces of music history involved in the making of this special album. Some notable attendees were Joe Williams, Ruth Brown, Bobby Short, Peggy Lee, Shirley Horn, Jon Hendricks, Diana Krall, Dianne Reeves, among others. Carmen was chosen to sing “Key Largo” for this Grammy Award-winning album. Her performance on “The Benny Carter Songbook” marked Carmen’s fourth studio collaboration reaffirming her stardom.

On occasion, Carmen has loaned her talented voice to stage productions and the music of Hollywood films. She sang on the haunting soundtrack for Oprah Winfrey’s “Beloved,” and recently starred in the title role of Duke Ellington’s Folk Opera “Queenie Pie” at the University of Texas, Butler School of Music.

At present, Carmen Bradford is doing it all whether it’s a duo concert with Shelly Berg, Big Band with the ladies of DIVA, or her new favorite performing with symphony orchestras around the world. Carmen Bradford’s body of work reflects a vast depth of musical experience and technical brilliance. She is also recognized for the overwhelming passion she brings to the lyrics. She has truly contributed to the perpetuation and preservation of this Great American art form called jazz, and continues to do so.

Michael Berkowitz is currently the Principal Pops Conductor of the Santa Rosa Symphony in Santa Rosa, Ca. Previous posts have included the Carolina Pops in Greensboro, NC and the Paducah Pops. He is also the Music Director/Conductor for Liza Minnelli, working with her on the Tony Award Winning, "Liza's At The Palace" on Broadway and in concerts around the world. Michael will be seen on PBS stations all over the country as Liza's Conductor/Drummer this December, when "Liza's at the Palace" is aired.

Michael served as Marvin Hamlisch's Music Director for nine years, appearing with him at the White House, the London Symphony and the Academy Awards as well as virtually every Symphony in the US. Michael also had a 13-year working relationship with arranger Nelson Riddle, as his Drummer, Assistant Conductor and Musical Contractor. Michael worked closely with Riddle on projects with Dame Kiri Te Kanawa, Linda Ronstadt, television specials and recordings.

Jerome Robbins requested Michael for the Premiere of his West Side Story Suite for the New York City Ballet. Michael performed this Ballet with the NYCB over 50 times, including two tours to Japan and the Kennedy Center.

Michael's recordings include the Original Cast Albums of Jerome Robbins Broadway, Liza's At The Palace, Follies with the NY Philharmonic, My Favorite Broadway, Anyone Can Whistle, Betty Buckley at Carnegie Hall, Tribute To Stephen Sondheim at Carnegie Hall, Route 66 with the Cincinnati Pops and many more.