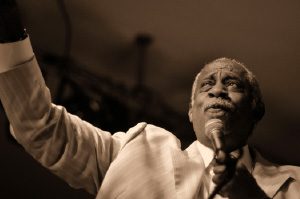 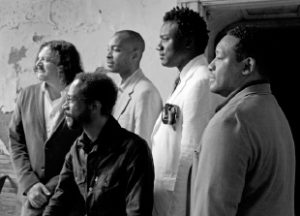 This feel-good event will celebrate the musical and community achievements of the Blade Family, and will include newly created orchestral arrangements, two generations of Blade Family performers, Brian Blade’s Fellowship Band, and “The Hallelujah Train.”


“(Brian Blade is) widely acknowledged as one of the best jazz drummers in the world. But he’s also a singer-songwriter; a session man for Bob Dylan and Joni Mitchell; the son of a singing preacher man from Louisiana.”  ~NPR

About The Hallelujah Train

Brady L. Blade, Sr. was called to pastor the Zion Baptist Church in Shreveport, Louisiana on September 5, 1961. Since then, he has dedicated his life to sharing the gospel with anyone who might have the ear and desire to listen. Given the gift of voice to render both sermon and song, he makes it plain through parables and lifting hymns of praise that tell of a spiritual joy in this life, but an even greater inheritance beyond these earthly bonds. The Hallelujah Train serves as a musical metaphor that places us all on the platform of life, waiting, watching and listening for the coming of that sanctified iron horse to stop on its course, pick us up and carry us on down the line. This is only one stop of many, bringing us all on board to see creation unfolding before our eyes. That lonesome whistle blowing to the tune of salvation and songs of redemption. There is amazing grace in this world. At times, there will be trouble in the way, but as another night becomes day, we will share our dreams and experiences on our trip so far. By doing this, perhaps we will feel less like strangers here, traveling through this barren land. Surely, He’s able to carry us through as we sing along with joy in our hearts.

About Brian Blade and the Fellowship Band

Brian Blade was born and raised in Shreveport. The first music he experienced was gospel and songs of praise at the Zion Baptist Church where his father, Brady L. Blade, Sr., has been the pastor for 52 years. In elementary school, music appreciation classes were an important part of his development and at age nine, he began playing the violin. Inspired by his older brother, Brady Blade, Jr., who had been the drummer at Zion Baptist Church, Brian shifted his focus to the drums throughout middle and high school.

As the Fellowship Band has grown, it has moved away from overt traditional references, even though they're an undercurrent throughout. Instead, as it explores milestones both inner and outer, Landmarks further speaks with the singular voice that the Fellowship Band has built upon since inception. Blending folkloric references, hints of church and spiritual concerns, jazz modality and countrified touchstones, Landmarks is the perfect name for Brian Blade & The Fellowship Band's fourth album; beyond its meaning to the group, it truly is yet another landmark recording in the core quintet's evolutionary travels. It may have come after a long gap in time, but that only makes it a wait all the more worthwhile.

While continuing to work with the Fellowship Band, Blade has been a member of Wayne Shorter's quartet since 2000. He has recorded with Daniel Lanois, Joni Mitchell, Ellis Marsalis, Marianne Faithfull, Emmylou Harris, Billy Childs, Herbie Hancock, Dorothy Scott and Bob Dylan.