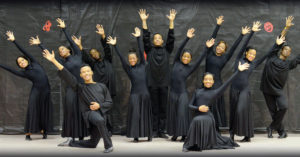 You’ll be transported to 1920’s Paris by these jazz and Brazilian-inspired scores by Milhaud, including “The Creation of the World,” uniquely brought to life by Grambling’s Orchesis Dance Company. Then, we’ll celebrate the 250th anniversary of Beethoven’s birth with his lively Symphony No. 7, appropriately dubbed “The Apotheosis of the Dance.”

Orchesis was founded in 1948 by Catherine Jones Williams to accomplish four major purposes. They were and are:

The year 1957 found the dance group in great demand for performances at Grambling State University and other institutions in surrounding areas. In response to the demand, performances were given at “half time” during athletic events. Public appreciation of the group’s work continued to be encouraging. This success resulted in the use of more intense study techniques, and performances became a priority for the company. By this time the modern dance group was working to prove the capabilities of the body as an expressive instrument by displaying stunning feats of virtuosity.

Fifty years after its founding, the Grambling State University Orchesis Dance Company has traveled extensively with the Marching Band and performed in many venue, such as hospitals, high schools, community centers, pageants, theaters, colleges and universities throughout the country and is one of the most promising components of Grambling State University’s extra curriculums.

Mrs. Dianne Maroney-Grigsby succeeded Virgie Brossard Pradia to become the company’s third Artistic Director. A native of Norfolk, VA, Dianne left home for New York in 1973. After joining the Alvin Ailey Repertory Ensemble, she toured extensively with that company, and
performed with the Alvin Ailey Dance Theatre in Europe, Asia, and Africa. In 1983 she left her position with Ailey to become Artistic Director of Orchesis and full time student at GSU. Mrs Maroney-Grigsby received her Bachelor Degree from GSU and her masters from Louisiana Tech University in nearby Ruston, Louisiana.

Dianne’s long association with Carol Anglin’s Louisiana Dance Foundation and its resident dance company, Louisiana Dance Theatre, led to an appointment to the position of Artistic Associate, and has won her the prestigious “Silver Leo Award” for her choreography at the 1994 Jazz Dance World Congress. In 1995 Dianne received the Living Legend award presented by the Nena Wideman Foundation of Shreveport, LA.

Orchesis has been an outstanding ambassador for Louisiana while representing the state at performances in Japan and throughout America, from New York to California and most recently in Chicago. Dianne’s and other fledgling choreographers work, and Orchesis Dance Company can be seen on TV commercials recently filmed for Proctor & Gamble and on The Cartoon Network. During a 2000 visit to Grambling State University by recording artist Vicky Wynans, Orchesis performed Dianne’s choreography to “Long As I Got King Jesus.” Orchesis along with the GSU Tiger Marching band was featured in the hit movie “Drumline” and Denzel Washington’s “The Great Debaters.”