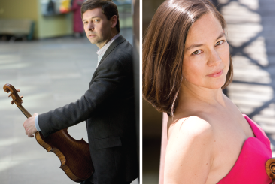 
“(Koljonen) is…a violinist of immense presence…This was a knowing audience, so it might have detected her exquisite timing and precision. Or perhaps all it sensed was a violinist of considerable soul.”   ~The Philadelphia Inquirer

Recognized as one of the most celebrated violinists of her generation, Elissa Lee Koljonen has thrilled audiences and critics in over 100 cities throughout the world. Ms. Koljonen initially received international acclaim when she became the first recipient of the prestigious Henryk Szeryng Foundation Award and silver medalist of the Carl Flesch International Violin Competition. Her playing has been lauded by the Helsingin Sanomat (Helsinki) as “sparkling, sensual and personal.” Dan Tucker of the Chicago Tribune writes, “She displayed boundless technique and musicianship”, and reports the Detroit News, “…Koljonen brings to her playing not just assured technique but unflinching purpose and confidence.”

Ms. Koljonen returned to the Philadelphia Orchestra in July 2007 performing the Shostakovich Violin Concerto #1. Ms. Koljonen has collaborated with such noted conductors as Mattias Bamert, James DePriest, Lawrence Foster, Richard Hickox, Neeme Järvi, Louis Lane, Andrew Litton, Eiji Oue and the late Bryden Thompson. Her engagements have taken her to some of the world’s most important venues, among them the Vienna Musikverein, Salzburg Mozarteum, Amsterdam Concertgebouw, London’s Barbican Centre, Seoul Arts Center, Boston’s Symphony Hall, and the Academy of Music in Philadelphia.

As a recitalist, Ms. Koljonen has performed in many musical capitals including London, Amsterdam, Salzburg, Seoul, Washington, D.C., Philadelphia and New York. Also an avid chamber musician, Ms. Koljonen appears regularly at festivals throughout North America, Europe and Asia. She garnered critical acclaim for her debut at the Queen Elisabeth Hall in London and her appearances with the London Mozart Players and the Orchestre Philharmonique de Monte-Carlo in a special concert celebrating the 700th anniversary of the Grimaldi Dynasty.

Ms. Koljonen is a protégé of the great Aaron Rosand at the Curtis Institute of Music. Through his influence, she continues the legacy and tradition of Leopold Auer and his legendary school of violin playing. She spends half her life in Philadelphia keeping Roberto, Sofia, Niko and Sammy out of trouble.

A violist of international reputation, Roberto Díaz is president and CEO of the Curtis Institute of Music, following in the footsteps of renowned soloist/directors such as Josef Hofmann, Efrem Zimbalist, and Rudolf Serkin. As a teacher of viola at Curtis and former principal viola of the Philadelphia Orchestra, Mr. Díaz has already had a significant impact on American musical life and continues to do so in his dual roles as performer and educator.

As a soloist, Mr. Díaz collaborates with leading conductors of our time on stages throughout North and South America, Europe, and Asia. He has also worked directly with important 20th- and 21st-century composers, including Krzysztof Penderecki, whose viola concerto he has performed many times with the composer on the podium and whose double concerto he premiered in the United States; and Edison Denisov who invited Mr. Díaz to Moscow to work on his viola concerto. Ricardo Lorenz, Roberto Sierra, and Jennifer Higdon have all written concerti for Mr. Díaz.

As a frequent recitalist, Mr. Díaz enjoys collaborating with young pianists, bringing a fresh approach to the repertoire and providing invaluable opportunities to artists at the beginnings of their careers. In addition to performing with major string quartets and pianists in chamber music series and festivals worldwide, Mr. Díaz has toured Europe, Asia, and the Americas a member of the Díaz Trio with violinist Andrés Cárdenes and cellist Andrés Díaz. The Díaz Trio has recorded for the Artek and Dorian labels.

Mr. Díaz's recordings on the Naxos label with pianist Robert Koenig include the complete works for viola and piano by Henri Vieuxtemps and a Grammy-nominated disc of viola transcriptions by William Primrose. Also on Naxos are Brahms sonatas with Jeremy Denk and Jonathan Leshnoff's Double Concerto with violinist Charles Wetherbee and the Iris Chamber Orchestra led by Michael Stern. On the New World Records label is a live recording of Mr. Díaz's performance of Jacob Druckman's Viola Concerto with Wolfgang Sawallisch and the Philadelphia Orchestra. On the Nimbus label is a recording of the Walton Viola Concerto with the New Haven Symphony and William Boughton. On the Bridge Records label are works for viola and orchestra by Peter Lieberson with the Odense Symphony Orchestra and Scott Yoo.

Since founding Curtis on Tour eight seasons ago, Mr. Díaz has taken the hugely successful program to North and South America, Europe and Asia, performing chamber music side-by-side with Curtis students and other faculty and alumni of the school. His tenure as president of Curtis has also seen the construction of a significant new building which doubled the size of the school's campus; the introduction of a classical guitar department and new conducting and string quartet programs; the launch of Curtis Summerfest, summer courses open to the public; and the debut of an online stage called Curtis Performs. In the fall of 2013 Curtis became the first classical music conservatory to offer free online classes through Coursera.

Also under Mr. Díaz’s leadership, Curtis has developed lasting collaborations with other music and arts institutions in Philadelphia and throughout the world and established a dynamic social entrepreneurship curriculum, supported by a prestigious Advancement Grant from The Pew Center for Arts and Heritage. Designed to develop the entrepreneurial and advocacy skills of young musicians, this curriculum includes the project-based Community Artist Program (CAP) and post-graduate Curtis ArtistYear Fellowship Program. Curtis was the first higher-education arts institution to join ArtistYear and respond to the challenge issued by the Aspen Institute’s Franklin Project: to foster a 21st-century national service system, with a goal of one million service-year positions created by 2023.

In addition to his decade-long tenure as principal viola of the Philadelphia Orchestra, where he performed the entire standard viola concerto repertoire and gave a number of Philadelphia Orchestra premieres, Mr. Díaz was principal viola of the National Symphony under Mstislav Rostropovich, a member of the Boston Symphony under Seiji Ozawa, and a member of the Minnesota Orchestra under Sir Neville Marriner. Mr. Díaz plays the ex-Primrose Amati viola.