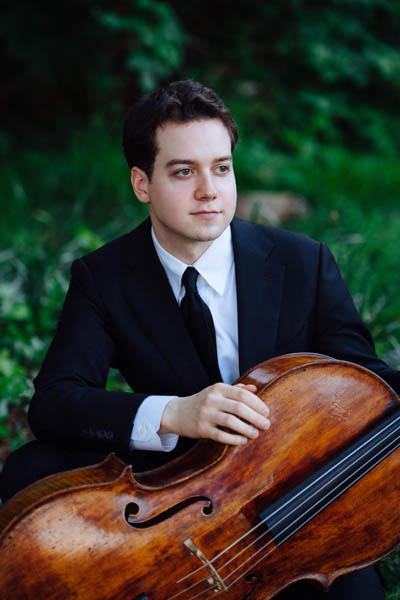 Celebrate the new season with an all-Tchaikovsky spectacular! Following the fanfare-like Polonaise from Eugene Onegin, Shreveport native son John-Henry Crawford returns to the SSO stage with the ever popular Rococo Variations. The program closes with the exciting Symphony No. 5.  You will not want to miss it!

John-Henry Crawford, a 26-year-old cellist from Shreveport, is a graduate of the Curtis Institute of Music where he studied with Carter Brey, Principal Cellist of New York Philharmonic and Peter Wiley, formerly of the Guarneri Quartet. John-Henry held the Nina and Billy Albert Fellowship at Curtis. He was accepted at age 15 and served as principal cellist of the Curtis Orchestra during his senior year. His is currently a scholarship graduate student of Joel Krosnick at the Juilliard School of Music in NY. He has also studied with Hans Jorgen Jensen and Andres Diaz.

John-Henry recently won first prize at the 2019 Carlos Prieto International Cello Competition, held in Morelia, Mexico. He gave his solo debut with the Philadelphia Orchestra as First Prize Winner of the orchestra’s Greenfield Concerto Competition. He received praise from The Philadelphia Inquirer, stating that he “projected polished charisma and a singing sound in Prokofiev’s Symphony-Concerto.” He was one of only two U.S. cellists selected worldwide to compete in the XV International Tchaikovsky Competition in St. Petersburg, Russia. John-Henry was invited to give a solo recital on the International Concert Series of the Louvre in Paris, and in 2015 he won First Prize in Cello and Grand Prize at the American String Teachers National Solo Competition. He has performed the Beethoven Triple Concerto with the Memphis Symphony and the Dvořák Concerto with Shreveport Symphony. He has been featured twice with Christopher O’Riley on National Public Radio’s “From the Top” show, and has given concerts in 26 states as well as Canada, Switzerland, Germany, France, Brazil, Costa Rica, Belgium, and Mexico. Crawford has soloed with many orchestras, including the Louisiana Philharmonic, Rapides Symphony, Mesquite Symphony, and has been a prize winner in numerous competitions, including the Lynn Harrell Competition of the Dallas Symphony and Music Teachers National Association. He was accepted at the prestigious Verbier Academy in Switzerland where he studied with Ralph Kirshbaum, USC’s Piatigorsky Chair cellist and Torleif  Thedeen, Scandinavian cellist and recording artist. His television performances have included WHYY public television in Philadelphia, and he is included in the documentary “Maestro Movie.”

John-Henry was an artist fellow at Itzhak Perlman’s Chamber Music Festival and at Music from Angel Fire in New Mexico. He performed the Brahms B-Flat Sextet at Boston’s French Cultural Museum in a chamber music concert with Malcolm Lowe, Concertmaster of the Boston Symphony, Edward Gazouleas, also of the BSO, Curtis President Roberto Diaz, and the Borromeo Quartet. John-Henry performs on the 200-year-old European cello smuggled out of Austria in 1938 by his grandfather, cellist Dr. Robert Popper. In addition to playing the cello he enjoys reading, swimming, and performing magic tricks.  johnhenrycrawford.com