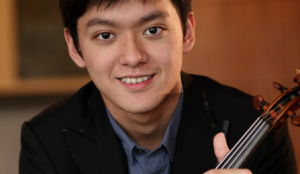 An emerging young soloist of enormous promise praised for his “grace, poise, and blistering virtuosity.”

Taiwanese violinist Yu-Chien (Benny) Tseng is rapidly building an international reputation as an emerging young soloist of enormous promise praised for his “grace, poise, and blistering virtuosity.” A student of Aaron Rosand and Ida Kavafian at the Curtis Institute of Music, Tseng is the first prizewinner at the Singapore International Violin Competitions and the Sarasate Violin Competition in Pamplona, Spain. In July 2015, he was awarded the second prize at the XV International Tchaikovsky Competition.

Yu-Chien Tseng has given recitals in Taiwan, Spain, Belgium, China and the United States. His debut recording (2012) is an album of French violin sonatas (Franck, Ravel and Debussy) on the Fuga Libera Label. He plays the Giuseppe Guarneri del Gesu 1732 Ex “Castelbarco-Tarisio,” on loan from the Chi-Mei Culture Foundation, Taiwan.