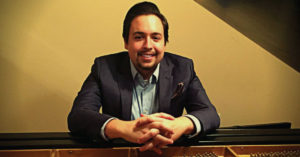 Enjoy Rachmaninoff’s virtuosic Concerto No. 1, followed by Stravinsky’s Suite from The Firebird and the transcendent Mysterious Mountain by Alan Hovhaness. Fascinating world-premiere videos, co-commissioned by the SSO, add depth to two of the works on this unique program.

Hailed for his “mastery, precision, and passion,” pianist Dominic Muzzi began training in the art of classical piano at the age of four, having shown keen aural ability before that age. Shortly thereafter, he began performing locally in his childhood home of central Florida, giving his first public solo recital at the age of 11 in a local music store. By the age of 14, Dominic had earned the American College of Musician’s National Level performance certificate. Presently, Dominic has performed across the United States and Europe, holding over a dozen top prizes in solo piano and concerto competitions. The previous season has been immensely successful for Dominic, having earned the gold medal and first prize in the 68th Wideman International Piano Concerto Competition, as well as first prize at the National finals of the Music Teachers National Association’s Young Artist Competition.

In addition to being a full-time student, Dominic works as an Associate Instructor for Indiana University in the secondary piano program, teaching both group piano and private students. Dominic is also in active demand as a collaborative pianist, with over a decade of professional experience performing with choirs, chamber ensembles, and solo musicians at the highest level of musicianship and facility. He has studied chamber music with renowned artists such as Peter Stumpf, Alex Kerr, and Kevork Mardirossian. He has participated in masterclasses and public lessons by Sergei Babayan, Jerome Lowenthal, Alexander Gavrylyuk, Jon Nakamatsu, and others.

This season, Dominic will debut with the Shreveport Symphony and Symphony New Hampshire, performing the first two piano concerti of Sergei Rachmaninoff. He will also perform two recitals in the Chopin for All concert series, sponsored by the Chopin Foundation of the United States.  www.dominicmuzzi.com