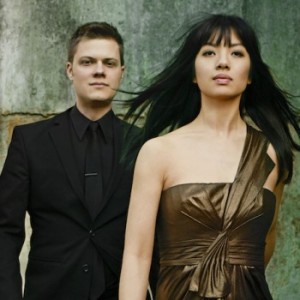 Duo piano artists Anderson & Roe have taken the internet by storm—come hear what the excitement is all about. The program also features the all-time favorite Rhapsody on a Theme of Paganini.

"The most dynamic duo of this generation"   ~San Francisco Classical Voice

The Anderson & Roe mission:
To make classical music a relevant and powerful force in society.

Known for their adrenalized performances, original compositions, and notorious music videos, GREG ANDERSON and ELIZABETH JOY ROE are revolutionizing the piano duo experience for the 21st century. Described as “the intense synchronization of genius” (ThirdCoast Digest) and “the most dynamic duo of this generation” (San Francisco Classical Voice), the Anderson & Roe Piano Duo aims to make classical music a relevant and powerful force around the world. Their recent albums on the Steinway Label (When Words Fade, An Amadeus Affair, and The Art of Bach) were all released to critical acclaim and have spent dozens of weeks at the top of the Billboard Classical Charts, while their Emmy-nominated, self-produced music videos have been viewed by millions on YouTube.

Since forming their dynamic musical partnership in 2002 as students at The Juilliard School, the Anderson & Roe Piano Duo has appeared on NPR and MTV, toured extensively worldwide as recitalists and orchestral soloists, and presented at numerous international leader symposiums. A performance by the Anderson & Roe Piano Duo was handpicked to appear on the Sounds of Juilliard CD celebrating the school’s centenary. Highlights of the 2015/16 season included tours throughout North America, Asia, and Europe; performances of Brahms’ Double Concerto in their arrangement for two pianos and orchestra; recitals in Lincoln Center’s Avery Fisher Hall at the Mostly Mozart Festival; and the premiere of their ambitious—and literally explosive—music film, The Rite of Spring, at the Wine Country Film Festival.  www.andersonroe.com