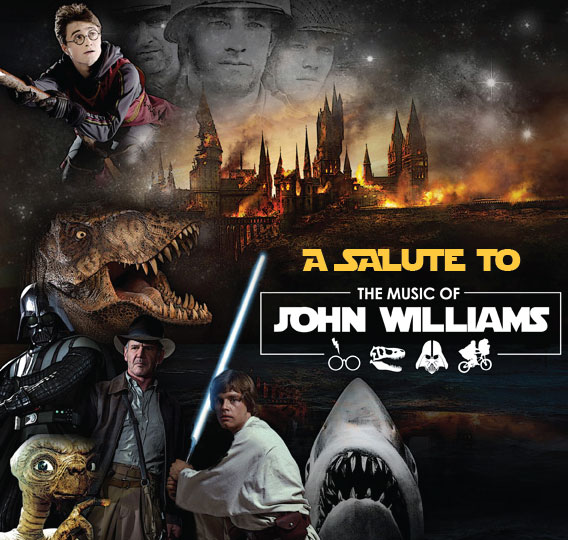 Revel in fantastic music by America’s greatest living composer for film―the incomparable John Williams. With Star Wars, E.T., Jaws, Harry Potter and more, this concert promises to be a delight for all ages!

I’ll bet you can hum any of these film scores: James Bond, Star Wars, Indiana Jones, Pirates of the Caribbean, Psycho. Now that you’ve got your earworm for the day, what makes these scores so memorable? Score brings us the world’s most celebrated composers discussing their craft and the magic of film music while exploring the making of the most iconic scores in history. Documentary, 93 min., NR.  |  Tickets

In a career that spans five decades, John Williams has become one of America’s most accomplished and successful composers for film and for the concert stage. He has served as music director and laureate conductor of one of the country’s treasured musical institutions, the Boston Pops Orchestra, and he maintains thriving artistic relationships with many of the world’s great orchestras, including the Boston Symphony Orchestra, the New York Philharmonic, the Chicago Symphony and the Los Angeles Philharmonic. Mr. Williams has received a variety of prestigious awards, including the National Medal of Arts, the Kennedy Center Honor, the Olympic Order, and numerous Academy Awards, Grammy Awards, Emmy Awards and Golden Globe Awards. He remains one of our nation’s most distinguished and contributive musical voices.

Mr. Williams has composed the music and served as music director for more than one hundred films. His 40-year artistic partnership with director Steven Spielberg has resulted in many of Hollywood’s most acclaimed and successful films, including Schindler’s List, E.T.: The Extra-Terrestrial, Jaws, Jurassic Park, Close Encounters of the Third Kind, four Indiana Jones films, Saving Private Ryan, Amistad, Munich, Hook, Catch Me If You Can, Minority Report, A.I.: Artificial Intelligence, Empire of the Sun, The Adventures of TinTin and War Horse. Their latest collaboration, The BFG, was released on July 1, 2016. Mr. Williams has composed the scores for all seven Star Wars films, the first three Harry Potter films, Superman: The Movie, JFK, Born on the Fourth of July, Memoirs of a Geisha, Far and Away, The Accidental Tourist, Home Alone, Nixon, The Patriot, Angela’s Ashes, Seven Years in Tibet, The Witches of Eastwick, Rosewood, Sleepers, Sabrina, Presumed Innocent, The Cowboys and The Reivers, among many others. He has worked with many legendary directors, including Alfred Hitchcock, William Wyler and Robert Altman. In 1971, he adapted the score for the film version of Fiddler on the Roof, for which he composed original violin cadenzas for renowned virtuoso Isaac Stern. He has appeared on recordings as pianist and conductor with Itzhak Perlman, Joshua Bell, Jessye Norman and others. Mr. Williams has received five Academy Awards and 50 Oscar nominations, making him the Academy’s most-nominated living person and the second-most nominated person in the history of the Oscars. His most recent nomination was for the film Star War: The Force Awakens. He also has received seven British Academy Awards (BAFTA), 22 Grammys, four Golden Globes, five Emmys, and numerous gold and platinum records.