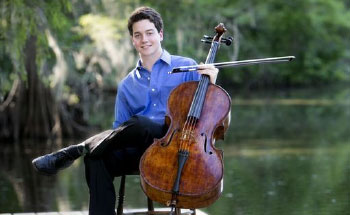 The majesty of Schubert’s Symphony No. 9 is paired with the highly entertaining and eclectic Cello Concerto by Friedrich Gulda, played by Shreveport native son and favorite John-Henry Crawford.

John-Henry Crawford, a 24-year-old cellist from Shreveport, LA, is a graduate of the Curtis Institute of Music where he studied with Carter Brey, Principal Cellist of New York Philharmonic and Peter Wiley, formerly of the Guarneri Quartet. John-Henry held the Nina and Billy Albert Fellowship at Curtis. He was accepted at age 15 and served as principal cellist of the Curtis Orchestra during his senior year.

John-Henry gave his solo debut with the Philadelphia Orchestra in 2011 as First Prize Winner of the orchestra’s Greenfield Concerto Competition. He received praise from The Philadelphia Inquirer, stating that he “projected polished charisma and a singing sound in Prokofiev’s Symphony-Concerto.” He has recently been chosen as one of only three U.S. cellists invited to the Tchaikowsky Competition in Russia, which happens in June every four years. This past November John-Henry was invited to give a solo recital on the International Concert Series of the Louvre in Paris. In 2015 he won First Prize in Cello and Grand Prize at the American String Teachers National Solo Competition, a competition which happens every other year. In May he performed the Beethoven Triple Concerto with the Memphis Symphony and recently performed the Dvořák Concerto with Shreveport Symphony. He has been featured twice with Christopher O’Riley on National Public Radio’s “From the Top” show, and has given concerts in 20 states as well as Canada, Switzerland, Germany, France, Brazil, Costa Rica, and Mexico. Crawford has soloed with many orchestras, including the Louisiana Philharmonic, Rapides Symphony, Mesquite Symphony, and has been a prize winner in numerous competitions, including the Lynn Harrell Competition of the Dallas Symphony, Music Teachers National Association, and Kingsville International. He was accepted at the prestigious Verbier Academy in Switzerland where he was the only American cellist of eight selected world-wide. There he studied with Ralph Kirshbaum, USC’s Piatigorsky Chair cellist and Torleif Thedeen, Scandinavian cellist and recording artist. His television performances have been on WHYY public television in Philadelphia, and he is included in the documentary “Maestro Movie.”