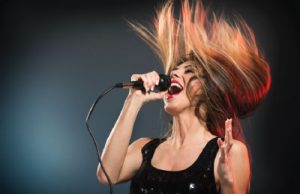 The music of Carole King, Tina Turner, Janis Joplin, Aretha Franklin, Pat Benatar, Heart, Carly Simon, and more is brought to life by the SSO and a cast of singers, with video footage of each iconic artist projected on the big screen.

Cassidy Catanzaro, vocals
As the lead singer and songwriter of the all-female rock band Antigone Rising, Cassidy Catanzaro toured the U.S. following a landmark record deal signed with both Starbucks' Hear music label and Atlantic Records, selling close to 2 million albums. She released her third solo album, What is REAL, in April 2016. She has toured with legendary acts such as The Rolling Stones and Aerosmith, and has sung with rock icons from Greg Allman to Steve Perry.

National television appearances include: The Tonight Show, TODAY, featured commentator in multiple programs for VH-1, and as the model for Seven Jeans in both print and TV. She has also been featured in Rolling Stone. Songwriting credits include tracks for pop star Demi Lovato with world-renown producer Max Martin; Rob Thomas of Matchbox 20; popular Swedish recording artist Tommy Burr; the Mount Holly Band, as well as other credits for film and television.

Shayna Steele, vocals
On stage and in the studio, New York City-based vocalist and songwriter Shayna Steele proves she is a vocal force to be reckoned with. After appearing on Broadway in RENT, Jesus Christ Superstar, and the original cast of Hairspray, Steele started writing music with partner David Cook in 2002. The two quickly developed a creative synergy, collaborating on Steele's eponymous debut EP in 2004. She and/or her band have since shared the stage with Ledisi, opened for George Clinton and the Sugar Hill Gang, was a featured singer with Bjorkestra and Grammy winning conducter/composer/trumpeter Dave Douglas, and was featured with Grammy-winner Snarky Puppy in 2014 at the Nice Jazz Festival, the Estival Jazz Festival, the North Sea Jazz Festival, Java Jazz Festival, and the Singapore Jazz Festival.She is also a vocalist with the Grammy-nominated Broadway Inspirational Voices and has worked as a sideman with Lizz Wright, Bette Midler, Natasha Bedingfield, John Legend, Matthew Morrison, Yeah Yeah Yeahs, Queen Latifah, Dolly Parton, Rihanna, and Kelly Clarkson. Her voice can be heard on the film soundtrack for Hairspray, as well as film soundtracks for The Bourne Legacy and Sex and the City 2. In December, she reprised her role with the “Dynamites” in NBC’s Hairspray Live.