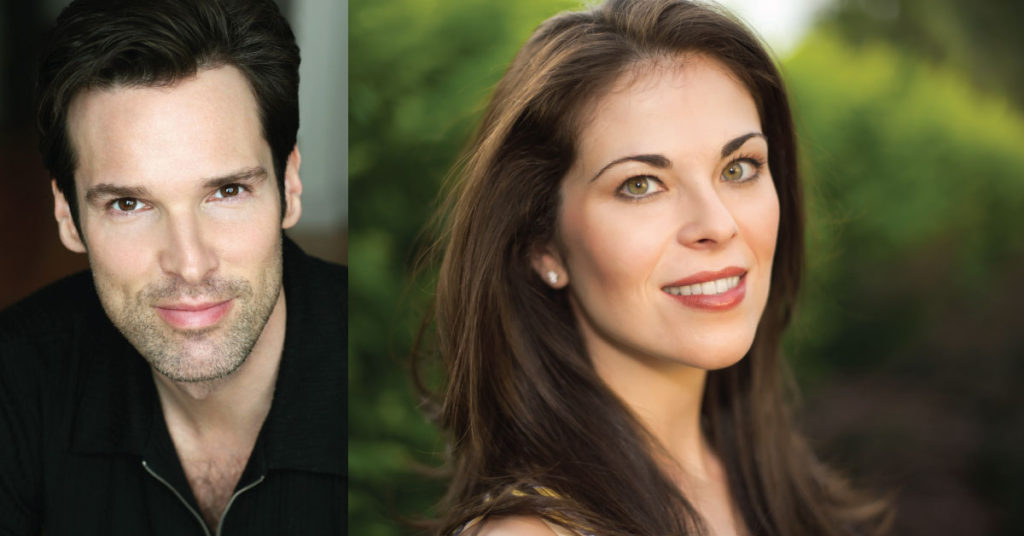 Hugh Panaro from Broadway’s Phantom of the Opera teams up with Louisiana favorite Sarah Jane McMahon for a lively evening of holiday magic.

Hugh Panaro is perhaps best known for having played the coveted role of the Phantom in Broadway’s The Phantom of the Opera over 2,000 times, including the 25th Anniversary production. In fact, Hugh is one of the few actors to be cast by Harold Prince as both The Phantom and Raoul in the show’s Broadway production and recently starred as the title role in the New York production of Sweeney Todd. Hugh made his Broadway debut in the original production of Les Misérables as Marius, the role he originated in the First National Company. He also created the roles of Buddy in the original Side Show (Sony cast recording); Julian Craster in Jule Styne’s last musical, The Red Shoes; and the title role in the American premiere of Cameron Mackintosh’s Martin Guerre.

Hugh was nominated for an Outer Critics Circle Award for his performance in the title role of Elton John’s Lestat, based on Anne Rice’s Vampire Chronicles. He made his West End debut in the original London company of Harold Prince’s Show Boat as Gaylord Ravenal, the role he previously played in the Broadway and Toronto productions. At the prestigious 5th Avenue Theater in Seattle, Hugh played George Seurat in Sunday in the Park with George, and Robert in Stephen Sondheim’s Company. Hugh’s performance as Jean Valjean in the Walnut Street Theater’s production of Les Misérables earned him the prestigious Barrymore Award, for which he was again nominated after a turn as Fagin in Oliver! In 2012, Hugh was honored with the Edwin Forrest Award for his long-term contribution to the theater.

His recordings include Jerome Kern Treasury, the original cast recording of Side Show, Tap Your Troubles Away (Herman), The Centennial (Weil), and Life On The Wicked Stage (Kern). His first solo CD, recorded with Sony/BMG, was released in 2007.

Hailed by The New York Times as “bright, active, and fastidiously musical,” and by Opera News as having “a golden sound,” Sarah Jane McMahon is recognized for her “beautiful vocal sophistication” and “sparkling stage presence.” Recently, Sarah Jane sang a Gala concert opposite Placido Domingo and made her debut with The San Francisco Symphony, Munich Philharmonic, the Wiener Konzert Haus, Bremen’s Die Glocke, and the Santo Domingo Festival in The Dominican Republic. A frequent guest artist at New York City Opera, she performed Mabel in their new production of The Pirates of Penzance and was described by The New York Times as “the most polished and flexible singer in the cast” and “a deft comic actress.” She also received their coveted Kolozsvar Award for her performances as Galatea in Handel’s Acis and Galatea, and was lauded for her “silvery-voiced soprano” and “real star presence” in Purcell’s King Arthur.

Selected by Maestro Placido Domingo to join the Los Angeles Opera, she sang with the celebrated tenor as the Fifth Flower Maiden in Parsifal, Naiad in Ariadne auf Naxos and The Milliner in Der Rosenkavalier. Sarah Jane also has performed with Bard SummerScape Festival as Xanthe in Richard Strauss’ Die Liebe der Danae, with the Washington Concert Opera as Dorinda in Handel’s Orlando, with Michigan Opera Theatre as Zerlina in Don Giovanni, Arizona Opera as Mabel in Pirates of Penzance, Opera Grand Rapids as Fiordiligi in Cosi Fan Tutte, Pamina in Die Zauberflöte, Maria in West Side Story and Micaela in Carmen, Opera Omaha as Fanny in Il Cambiale di Matrimonio, Toledo Opera as Violetta in La Traviata, and Josephine in HMS Pinafore with both the Louisiana Philharmonic Orchestra and San Antonio Opera.