Your magic unites all that custom has divided,
All humankind become brothers under the sway of thy gentle wings

It’s a simple tune known the world over. An earworm, really. Consisting almost exclusively of the first five notes of the major scale in smooth, step-wise motion, its range is so small that anyone can easily sing it, hum it, whistle it. It comes across as something of a nursery song, full of innocence. But there is nothing naïve about the deliberate choices Beethoven made in writing his famous ‘Ode to Joy’ melody. Its very simplicity has propelled a message that can change the world.

As a child of the Enlightenment, bathed in the age of revolution—American, French and Industrial—Beethoven witnessed dramatic social and political change, and dared hope for more. He was drawn to Friedrich Schiller’s 1785 poem “To Joy,” a thinly veiled hymn to freedom, suffused with the other two pillars of the French Revolution: equality and brotherhood. Beethoven knew that words have power, but he understood that marrying them to an irresistible melody would carry them across time and cultures.

That melody is now the anthem of the European Union. It is a Christmas and New Year’s staple throughout Japan. It’s sung in churches across the world as “Joyful, Joyful, We Adore Thee.” From Tiananmen Square to the fall of the Berlin Wall to resistance to Pinochet’s military dictatorship in Chile, Beethoven’s Ode inspired, and continues to inspire, those striving for human rights.

“Arising in the heart, may it return to the heart.” This was Beethoven’s wish, as inscribed on the title page of his Missa solemnis, written around the same time as his Ninth Symphony. The clarity and directness of the simple tune Beethoven composed resulted in the perfect vector for the message of the text. Simplicity, accessibility and purity take Beethoven’s music, and the message of universal brotherhood it conveys, directly “to the heart,” implanting it in our emotional core, where it can inspire and stir us to action. 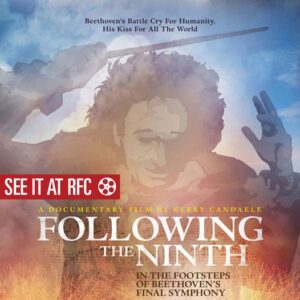 This week, three cultural institutions are offering opportunities to reflect upon and experience Beethoven’s achievement. Following the Ninth, an award-winning documentary film, screens at the Robinson Film Center on Tuesday, September 20 and explores the worldwide reach and power of this nearly 200-year-old, yet somehow timeless, music. At the Norton Art Gallery, “The French Revolution on Film” runs through October 30, featuring two dozen vintage film posters spanning nearly a century of filmmaking and representing 10 different countries. The egalitarian ideals of the French Republic, however imperfect their implementation, constituted a template for mankind’s future that Beethoven longed to see.

And on Saturday, September 24, the Shreveport Symphony, along with a quartet of world-class vocal soloists and a chorus of over 170 singers from four choirs hailing from Shreveport and Natchitoches, present “Beethoven’s Ninth Symphony—Revolution in Music,” a rare opportunity to experience, in its entirety, one of the world’s most impactful artistic achievements.

Rational argument can be persuasive, but nothing motivates like emotion. Beethoven, wholly capable of writing complex, sometimes nearly inscrutable, music, deliberately chose to set the most important text of Schiller’s poem to a simple, elegant melody that takes hold of our hearts and won’t let go. Given the importance of mutual respect and a sense of shared destiny in addressing the challenges of the 21st century and beyond, I say “thank goodness” for this.